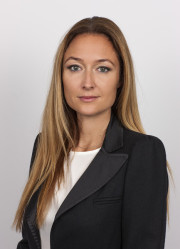 With these strong foundations, Anna moved into the world of fashion with Giorgio Armani. She spent the ensuing 5 years heading up the UK marketing and events and was at the forefront of Armani's Founding Partner initiatives for launching Bono's (PRODUCT) RED in London where she project managed the 'One Night Only' event at Earls Court 2006, featuring performances from Beyonce amongst other prodigious names.  Alongside this Anna spearheaded all celebrity endorsement/commercial opportunities with acclaimed film, music and sports talent including The England (with Captain David Beckham) and Chelsea football teams.

This lead on to 2 years as Head of Brands and Special Projects for one of the UK's leading talent publicity agencies, Public Eye Communications. Anna delivered prolific global endorsement campaigns such as Cat Deeley as the face of Pantene.

In 2012 Anna was approached by The Soho House group to become one of its committee members with the task of introducing 10 select founding members from the arts and media for their most prestigious new London club, Little House.

2013 saw the inception of Anna Matthews Consultancy Limited, a consultancy and strategic introductory outfit encompassing the facilitation of commercial partnerships and sponsorship opportunities as well as niche event and project management services.

Take a look at our services.